The gardens of the
Alcazar of Seville

A garden is a human adaptation of nature for its use and enjoyment, a living element conceived for the delight of the senses and the pursuit of pleasure. Gardens have been present since the beginning of humanity in all cultures and great civilizations, reflecting in them the beliefs and philosophical thoughts of each era.

Those were the gardens of Al-Andalus praised in poems and texts. We know that they constituted a fundamental element in the palatial enclosure of the Muslim Isbiliya, although little now remains of the functionality of those medieval gardens. However, the Andalusian tradition has remained thanks to the fact that, to a greater or lesser degree, the structural reforms have always preserved the Muslim heritage.

The gardens of the Alcazar of Seville, with more than six hectares and about 170 plant species from all over the world, are a synthesis of gardening and emotional architecture, where different artistic styles have circulated, little by little, creating this beautiful work of art, this space within the Sevillian courtroom where intimacy and silence incite to emotional contemplation.

The so-called Renaissance Gardens were developed in parallel to the west facade of the Mudejar Palace and the south one of this palace and the Gothic Palace. The Pond of Mercury, the Garden of Dance, that of Troya, that of La Galera, that of Flowers and that of the Prince, have in common the spirit of the inheritance of the Andalusian gardens that were rearranged, during the reign of Carlos V, to the Italian way with Mannerist decorations. This also led to the entire remodeling of the south facade, where windows and corridors were created to turn it into a large viewpoint.

Maybe this pool already existed in the Almohad citadel and its main purpose was to store and supply water to the entire palace complex.

The bronze statue of the god Mercury, as well as the lions that support the shields and the railing that surrounds the pond, were designed by Diego Pesquera at the end of the sixteenthcentury and cast by Bartolomé Morel, who also cast the Giraldillo at the top of the Giralda.

On the east side of the Mercury Pond, as a great theatrical set, stands a gallery along more than 150 meters that has become one of the most peculiar places in the Alcazar. It was the architect Vermondo Resta, at the beginning of the seventeenth-century who converted the primitive canvas of the Almohad wall into an ornamental stone structure emulating marine rocks. Diego Esquivel was in charge of completing the gallery with paintings of mythological scenes and exotic birds. The upper part is a gallery that you may visit, a viewpoint from where you have magnificent gardens views.

This Mannerist courtyard of Muslim descent is isolated from other gardens by walls and by a first floor structured in a white marble colonnade gallery with semicircular and grotesque arches by Vermondo Resta from the mid-16th century. It was known as the garden of the labyrinth until the seventeenth-century, when the labyrinth was removed and its structure reorganized. The fountain was installed in the eighteenth-century. 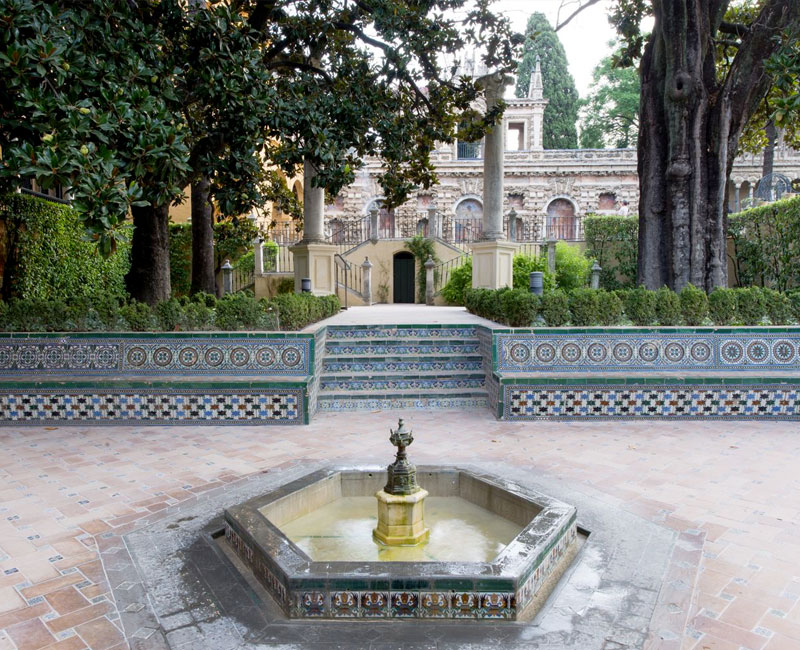 It is the largest of the Renaissance courtyards. Located in front of the south facade of the Gothic Palace, this courtyard is organized on two levels, with a rectangular floor plan with flowerbeds, connected by some eighteenth-century stairs with the Mercurio Pond and with a passageway through which you access the Baths of Doña María. In a photo by Jean Laurent from the nineteenth-century, a satyr and a dancing nymph appear in the two columns at the entrance, a scene that possibly gave its name to this garden, but their whereabouts are unknown.

This garden that responds to the type of transept patio, with four flower beds with vegetation, delimits almost the entire south facade of the Mudejar Palace. It owes its name to the sculpture of two facing ships that floated on a monumental pond in the eighteenth-century. 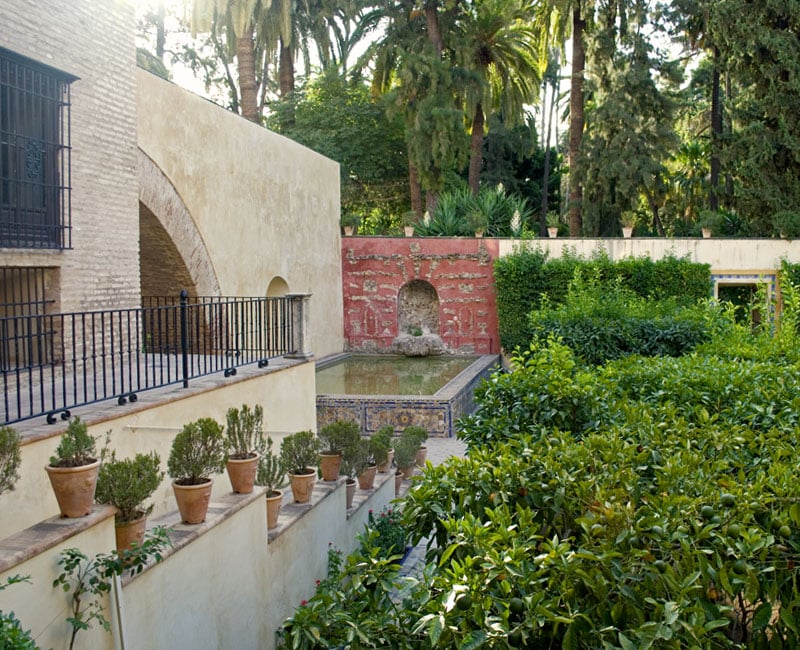 A bust of Charles V stands out, from the balance of the Muslim transept courtyards, on the remains of a small grotto from the end of the sixteenth-century. 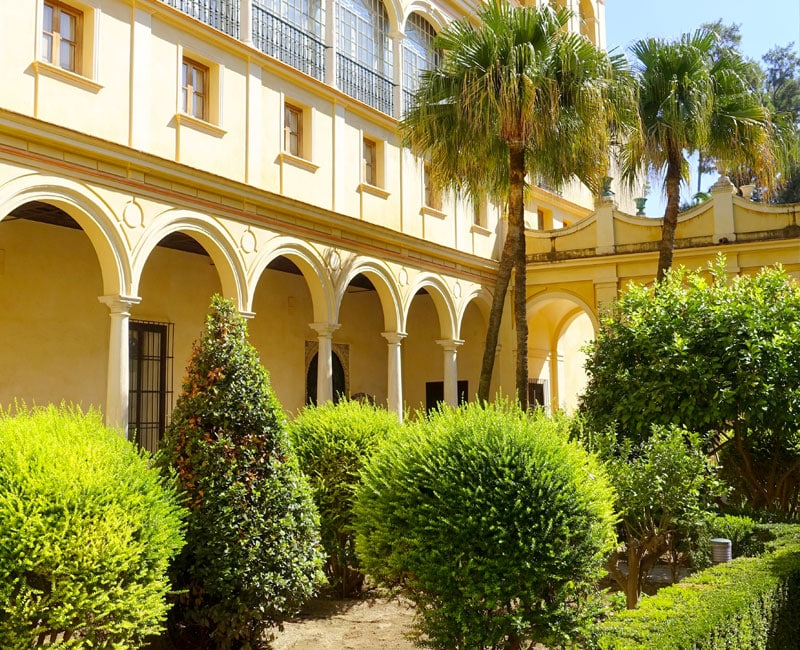 In the Jardin del Principe, we find ourselves again before a transept courtyard, the oldest one of the Renaissance gardens. The leisurely beauty of the three-section Mannerist portal with semicircular arches stands out with its windows and glazed gallery made by Lorenzo de Oviedo in the fifteenth-century. From here, you can directly access the Prince Hall of the Mudejar Palace, hence the name of this garden.

This garden was built in the sixteenth-century by Islamic lines on the occasion of the nuptials of Emperor Carlos I and Isabel of Portugal. The bronze statue of the god Neptune stands on a central fountain that is accompanied by eight flowerbeds. In the south, the rustic rigging (opus rusticum) – widely used in Italian mannerist palaces – stands out in the wall drafted by Vermondo Resta, what would become later the Grutescos Gallery. In it, we find a very peculiar element: a fountain that has a hydraulic organ, being the only fountain-organ from the seventeeth-century in Spain, while in Europe there are only three. Every hour is activated and a song sounds automatically.

It is believed that the name of this garden comes because the hedges were topped by figures of topiary nymphs, which is the art of pruning plants to create sculptures, an art that became fashionable during the Renaissance and that has its origin in Roman gardening.

This type of sculpture was called nymphaeos in ancient times, and began to be placed in Roman gardens when gardens for horticultural use were associated with the enjoyment and contemplation of nature.

It was then, when galleries of imaginary caves and nymphaeums were placed in these gardens for nymphs and mythological beings to live. All this symbolism was loved by the European Renaissance royalty of the time, so the Emperor Carlos I of Spain and V of Germany wanted to carry out works of height to demonstrate the splendor of the empire he was building. 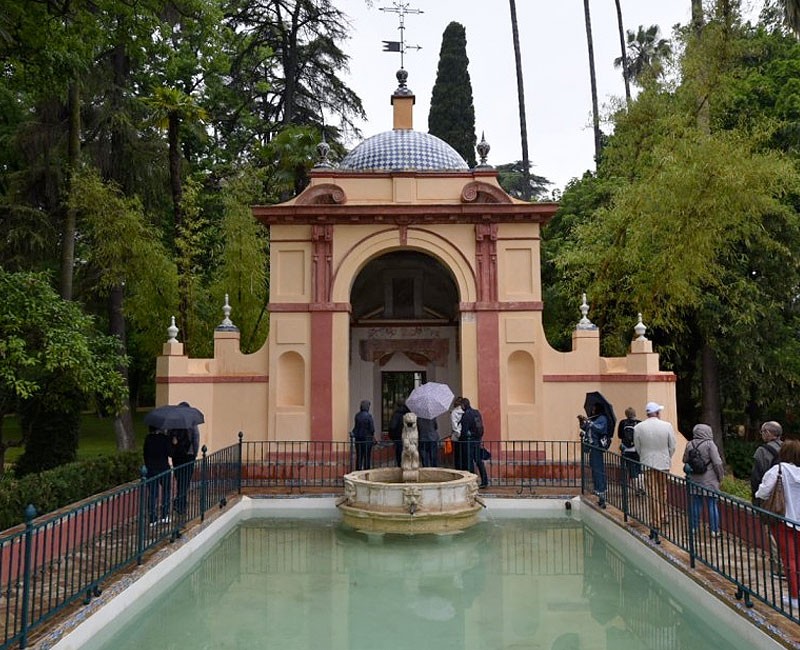 The Cenador del León is the only one that is preserved of the two built by Diego Martín de Orejuela in the sixteenth-century. The chapel-like structure, of colossal order, with a tile semicircular arch niche is covered by a hemispherical vault. Right in front of it, an anonymous fountain with a rampant lion that gives its name to the arbor.

This pavilion, in the shape of a qubba, copies the model found in the Royal Cemetery of the Nasrid in Granada. It was built in the Mudejar style in the middle of the sixteenth-century, by Juan Fernández, on traces by Luis de Vega. This building has a central body with a square plan covered by a hemispherical dome that is expressed on the outside with a hipped roof. Both, the interior and exterior, are covered with tiles from the sixteenth-century. The exterior is closed with four arcaded galleries with semicircular arches. 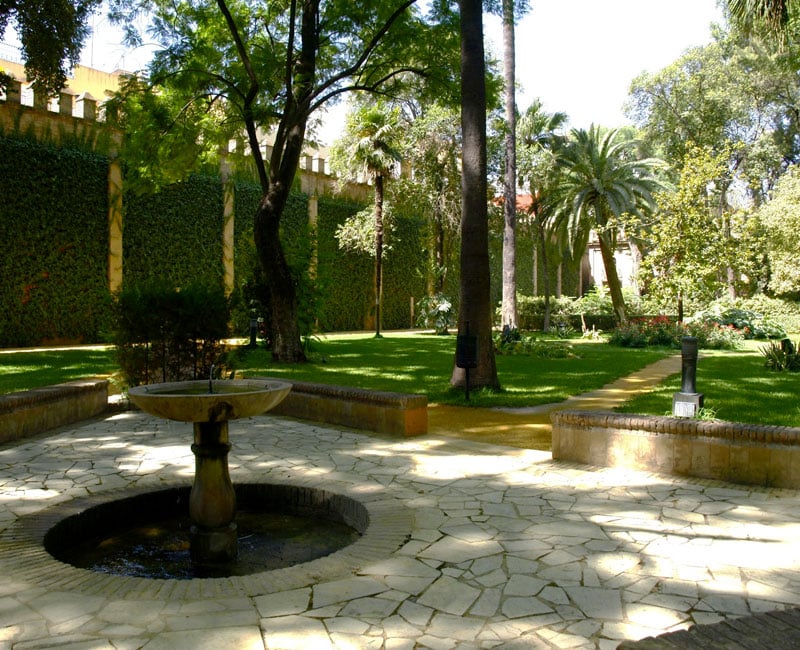 This garden is located on the old Huerta de la Alcoba, lands that were already attached to the Alcazar in Almohad times. It will be at the beginning of the XX century when this area is reformed, though it was still being exploited in an agrarian way, and a garden with English influence is made, hence its name. 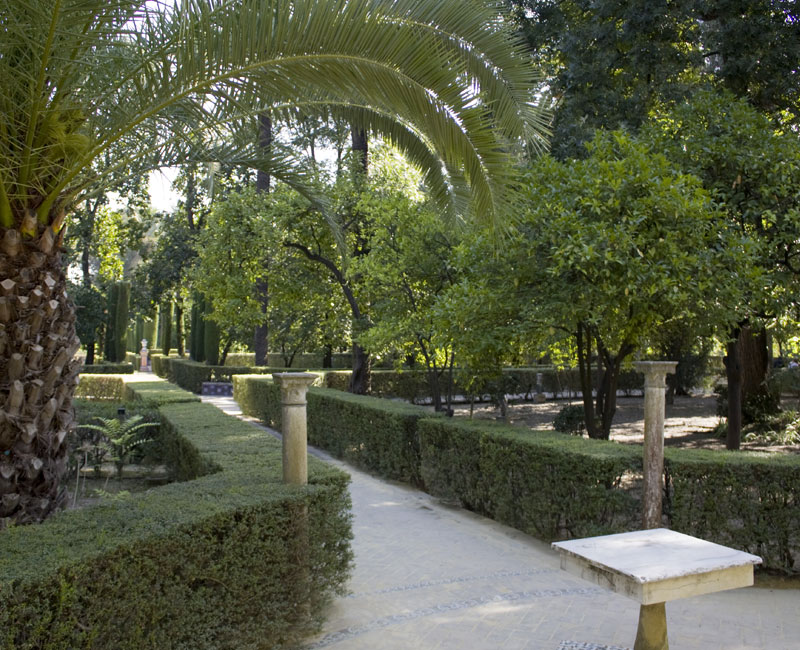 The Jardín del Marqués de la Vega-Inclán, also called Retiro Garden, was designed by José Gómez Millán between 1913 and 1017, taking the Ladies Garden as model. A grid of squares was laid out with walkways between them, in some sections these have water running along them. Urns on pedestals and tile-clad benches and balaustrades complete the design. A pergola was also built above one of the water-wheels that once irrigated this Moorish vegetable gardens. 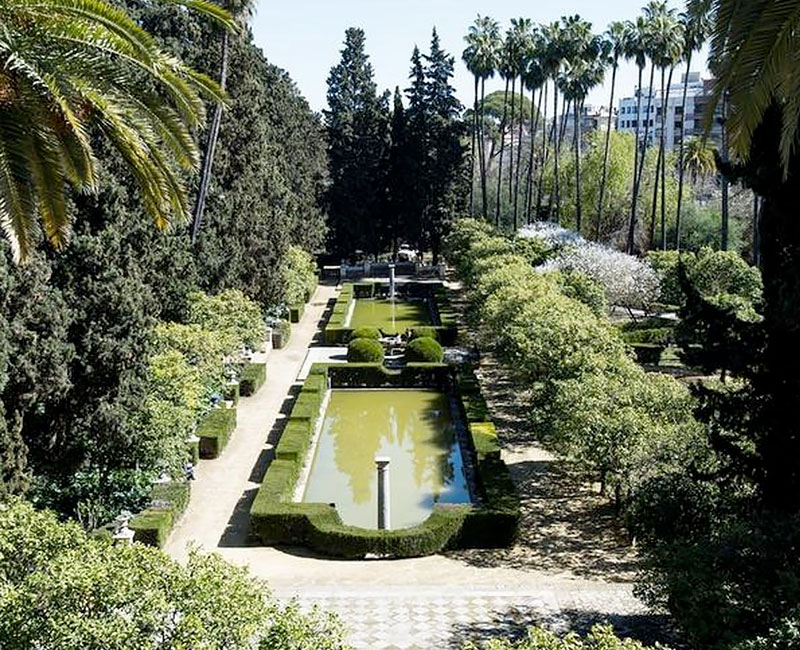 Garden of the Poets

When in the middle of the twentieth-century the curator of the Alcázar, Joaquín Romero Murube decided to build this garden – under a design by Javier Winthuysen – he proposed it as a synthesis of the cultures that had influenced the Alcázar, especially the Islamic, Renaissance and Romantic styles, thus creating the typology of typical Sevillian gardens. 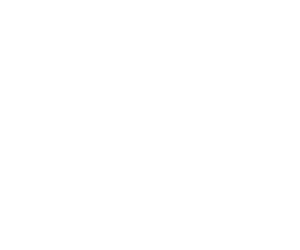 History of the Alcazar

For centuries, the Alcazar has become one of the best-kept treasures in the city. Know its origin. 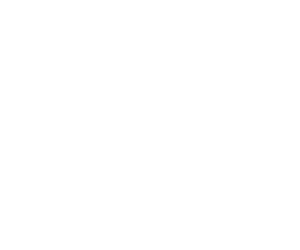 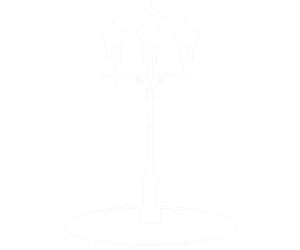 Visit the lovely stately courtyard that has become a symbol for the city of Seville. 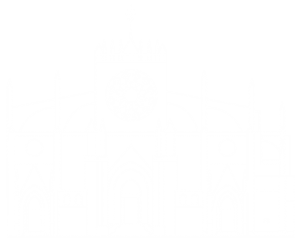